Well, in simple terms, it is a measure of a solution’s ability to conduct electricity.

What is electrical conductivity?

In simple terms, it is a measure of a solution’s ability to conduct electricity.

Conductivity depends on the concentration of ions in solution, but does not identify the types of those ions. So, it gives an overall indication of inorganic content and it can be used as a single test for total ionic content of purified water.  Conductivity reports rapidly a change of ionic concentration and this property combined with the fact that conductivity sensors can be configured in a rugged and robust manner, ensures that the test is ideal for in-process testing. 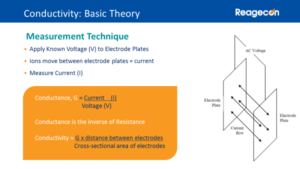 Rather than measuring the cell’s electrode dimensions, it is much easier to measure their effect on the measured value by testing the response to a Conductivity Standard:

This approach means that conductivity cells don’t need to be designed to permit measurement of their electrodes’ dimensions and nowadays appear with a variety of designs that are far more robust than the early parallel plates design. 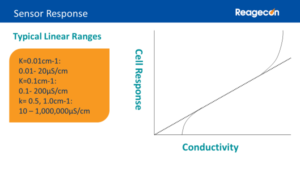 High quality standards can be used for calibration and control of the whole test system, but also to validate the test method, qualify the instrument and test the competency of the analyst. Such standards play a vital role as Reference Materials in the achievement and maintenance of ISO17025 and ISO17034 accreditations. 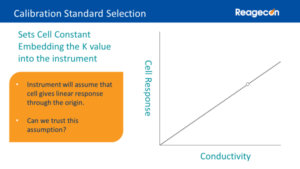 All of Reagecon’s Conductivity Standards have an aqueous matrix.  As 99% of conductivity measurements are made on aqueous samples then this matches the samples’ matrix.

Stability of the Standard

All of Reagecon’s Conductivity Standards have fully validated shelf-lives.  With the exception of the 1.3 microsiemens/centimetre standard, all of their expiry dates are independent of the date of first opening the bottle.  This means that it is not necessary to record a reduced expiry date once the bottle has been opened.

All of Reagecon’s products are provided to the customer with a certificate of analysis. This certificate states the nominal value of the standard, for example 10 microsiemens/centimetre at 25°C. It also contains the product number, lot number and expiry date. Most importantly it presents the exact measured value and the specification range for the product. The narrative of the certificate gives the test method, the actual NIST standard that the product is traceable to and the uncertainty of measurement attributable to the whole test system. Finally, in the case of conductivity standards the product is tested using an ISO17025 accredited test method. As with all of Reagecon’s certificates of analysis, the certificate is dated and signed.

Other articles that may be of interest: