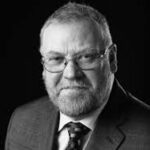 John Barron, is an Irish based chemical metrologist who is a leading world authority on the development, manufacture, application and distribution of chemical and physical standards and reference materials. He is the founder, chairman and CEO of Reagecon, the largest producer of such standards worldwide. The company produces in excess of 10,000 of such products and John Barron has either been lead scientist or been involved with the research and development team that developed all of these. The products developed cover a wide range of areas that include standards for Electrochemistry, Spectroscopy, Total Organic Carbon, Cation and Anion standards and a wide range of Organic standards. They also include physical standards covering diverse areas such as Viscosity, Density, Colour, Refractive Index, Osmolality and other niches within physical chemistry. Included within the organic standards are such products as Volatile Organics (VOCs), Polyaromatics (PAHs), Pesticides, Phthalates and many others. In total the portfolio of products extends to 54 different families with more under development. John Barron has written and published substantial amounts of written material, has scripted and produced many webinars and has made presentations at conferences all over the world.

Reagecon's Clinical and Life Sciences Catalogue includes a detailed range of products for both the Clinical Laboratory and Mortuary Marketplace. The products within this offering cover a variety of areas such as Cellular Pathology, instruments and...

A spectrophotometer, as an analytical tool is used in almost every type of chemical, biological or life science laboratory. The instrument may range in complexity from a simple single beam instrument, right through to dual beam or complex and...

Reagecon is the worlds largest producer of conductivity standards and offers over 45 different values of such standards. The company is the only producer in the world with the capability to manufacture and stabilise these products at such low levels of...

The testing and analysis of medicines for human and animal use, is one of the most important segments within the science of analytical chemistry. The equipment and technology being used is growing in sophistication and sensitivity. Similarly, the demand...

10 Steps for Measuring pH Accurately and Consistently is an infographic created by Reagecon which details the most important steps to measure pH. From selecting an appropriate measuring system right through to the role of accreditation in pH measurement,...

Azo Dye Metabolite Standards are offered by Reagecon as ready to use, single and mixed compounds which have been dissolved in a number of matrices to facilitate testing requirements. These standards can be viewed in our Physical and Chemical Standards...

Reagecon Turbiform Stabilised Formazin Turbitity Standards have been developed by the Reagecon Research and Development team. This range of standards is ready to use at 13 different NTU values, is completely safe, EPA approved and are stable (at least 2...